Find Casino
The basics of Texas Hold’em are pretty easy to learn and after the following guide, you’ll have enough knowledge to start playing poker online. However, Texas Hold’em, just like all poker games, is a strategy game and it takes a long time and a lot of practice to master it fully.

How To Play Texas Hold’em Poker

Texas Hold’em is played with several players. All players are seated around a poker table with a dealer on one side. It’s the dealer’s job to deal the cards and control the game. When playing Texas Hold’em at home, the task of being the dealer can be shared among the players.

The goal of the game is to get the best hand with a total of five cards. We’ll explain the different hands and cards as well as their value later in this guide. First, we’ll walk you through a round of poker so you understand the basics of the game better.

One round of Texas Hold’em can be divided into four different stages as follows. Note that there is, technically, no limit on how many rounds there can be in a game of poker since it’s not over until one player wins the whole pot.

Example of how to play:

Stage 1 (small and big blind): Every player gets two cards each dealt face down. Two players are in charge of wagering the “blinds” – one big blind and one small blind – which are initial bets that make up the foundation of the price pot. For each new round that’s initiated, the task of wagering the blinds shifts so that every player gets to pay the blinds at some point. Generally speaking, the big blind is twice the size of the small blind.

Before moving on to the next stage, every player has to match the big blind. If a player doesn’t think the two cards they got are good enough to continue playing, he or she can fold.

Stage 2 (the flop): Now, three cards called the flop are dealt on the table facing up. These cards are community cards and can be used by all the players. Then another round of betting is conducted and players that don’t want to continue playing can fold.

Stage 3 (the turn): Another community card is dealt. This card is called the turn and can also be used by all players around the table. Then the third round of betting is conducted and players have the option of folding.

Stage 4 (the river): Now the fifth and final community card is dealt. This one is called the river and can also be used by all players. After that, a last round of wagering is done before everyone has to show their cards and a winner is determined.

Also, in case all but one player folds before the round is over, the last player automatically wins. This player does not have to show the two cards he or she had.

Another example of a Texas Hold’em em Round: 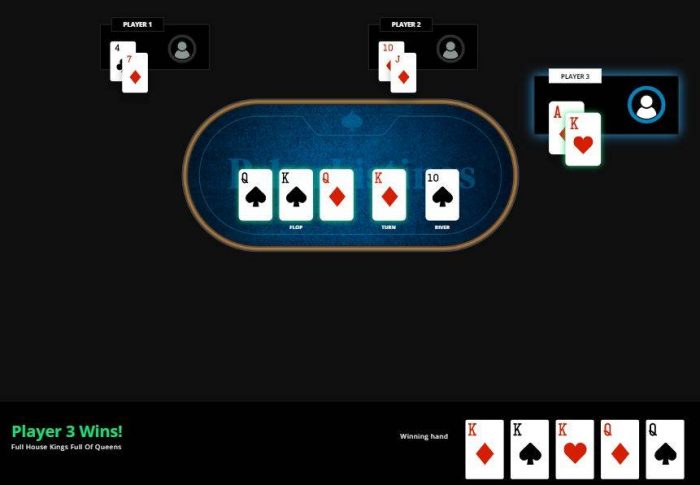 In the image above, Player 3 wins with a full house.

To better understand how Texas Hold’em is played, you need to understand the rules. As mentioned, the player with the best hand wins a round and the player that wins the last hand and takes home the whole pot wins the game.

Poker is played with one standard deck of 52 playing cards, split into four suits: hearts, clubs, diamonds, and spades. The cards are:

With those cards, each player has to try and create one of the following hands.

In addition to these hands, there is something called a kicker. The kickers are the cards that are not included in the hand. For example, if you have a two pair you have one kicker, and with a three of a kind, you have two kickers.

The purpose of the kicker is to determine which of two players win in case they both have the same hand. The highest kicker wins.

Can you Play Online?

When playing Texas Hold’em poker online, you have two options to choose from. You either play it as video poker which is similar in a slot machine. That means you’re technically playing against a computer and that the game is completely random.

To play Texas Hold’em online vs other players, you have to find a poker site where virtual poker tables are offered and you play with other real players. There are many different poker sites in Indian and we have recommended some of the best ones on this site.

The sites below offer Texas Hold Em in slots form.