Find Casino
Craps, sometimes called seven-eleven, is the name of one of the most popular dice games in the world today. The game is played on both online casinos and land-based casinos and is rather easy to learn how to play. In casinos, you play craps on special craps tables where you both place your bets and roll the dices, and if you play online you play on a virtual table that’s an exact replica of the real table. There is also some version of craps that can be played outside of casinos and they’re often referred to as “street craps”.

How to Play Craps Online

In the following craps guide, we’ll walk you through the game of craps, teach you the basic rules, and provide some tips on how to play craps to win. We’ll also offer recommendations of different types of craps as well as the best online casino in India for playing craps.

First things first, we’ll walk you through how to play a round of craps:

Craps can be played with several players at the same time.

One player is the “Shooter” for each round but everyone partaking can bet even if they aren’t rolling the dice.

If the first roll, called a Come-Out Roll, either result in the shooter winning or losing, that round is automatically over. However, if the shooter doesn’t win, you continue playing following the above-mentioned rules.

Craps Strategy Tip: When playing craps at a land-based casino, you’re not allowed to keep instructions or a cheat sheet of the different bets with you at the table. Therefore, we recommend that you start playing craps online because then, nothing stops you from playing with an explanation of the bets in front of you. 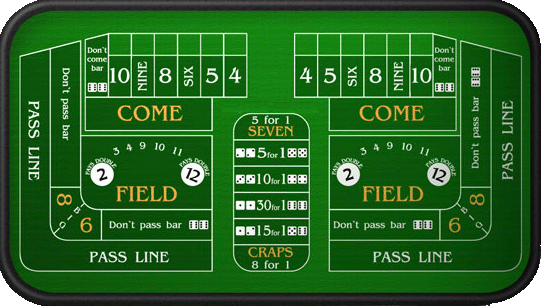 Even though it’s quite easy to learn the basics of craps, the game can be rather hectic, and, as a player, you have many bets and strategies to choose from. Because of that, you should always learn how to play craps and maybe even watch a few rounds before you start playing. The game features some unique terminology that should also know before you get started.

As with most games, the more you know about craps, the easier it is to play which will make it more enjoyable while also increasing your chances of winning.

The basic rules of craps go as follows. One player – called the shooter – throws two six-sided dices on the craps table and the numbers he gets determines whether he wins, loses, or can continue playing. The other players at the table can also bet on the shooter, but more about that in a second. First, we need to take a look at the different bets in craps because it’s the bets that make up the foundation of craps rules.

Pass Line: is the easiest and most basic bet you can place in craps. It means you put your wager on the prediction that the result will be either 7 or 11. If that is the case, the shooter will get his wager doubled.

If the shooter gest 2, 3 or 12 (called craps) he loses his wager and the round is over.

Don’t Pass Line: this is the opposite of a pass line bet and you’re basically betting against the shooter, ie. you want the shooter to get a 2, 3, or 12 or establish a point and then get 7 before he rolls the established point again.

Come Bets: a come bet can be placed after the shooter has rolled the dice and it means you win if the shooter gets 7 or 11, and loses if he gets 2, 3 or 12. In case the shooter rolls another number, that number becomes your point and if he rolls that same point again before rolling a 7, the Come Bet loses.

There is really one version of craps offered online and it follows the same rules. There are certain exceptions with small rule changes such as 12 always resulting in a tie, but, generally speaking, the rules are the same.

That being said, you can play craps online in two different versions: either as a slot machine or in a live casino.

Now, craps as slot machines are not very common and the number of games is limited, which is why we don’t recommend it.

Instead, we always encourage our readers to play craps at a live casino where you’ll have a real dealer that’s broadcasted from a TV-studio as well as the possibility of other real players at the same table. In fact, we always recommend that you play table, card, and dice games at live casinos because it’s the most authentic and correct way to do so.

Looking for an online casino in India that offers craps? Then you’ve come to the right place.

Our main objective with this website is to provide our readers with tips on which casinos are best to play at, how one can find a reliable casino as well as how certain games are played. That means that the core of this site is made up of casino recommendations and many of the listed casinos do offer craps.

So, if you’re looking to start playing craps, we refer you to our comprehensive list of the best online casinos in India.